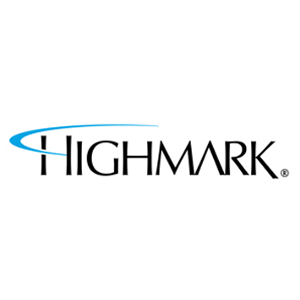 Highmark is a Pittsburgh-based Blue Cross Blue Shield (BCBS) licensee offering health insurance plans in Pennsylvania and surrounding states. The company operates as a not-for-profit health plan that is among the largest in the country.

Highmark was created in 1996 from the merger of two much older BCBS companies, both of which reach back to the 1930s. Blue Cross of Western Pennsylvania and Pennsylvania Blue Shield operated as part of Highmark but under their original names for several years before the Highmark name came into official use.

Highmark today has more than 4.7 million members in Pennsylvania and also serves parts of Georgia and Delaware, making them one a major player in the health insurance market for the region.

The company’s headquarters remain in Pittsburgh, and they sell individual and family as well as group plans across the service area. They also offer Medicare Advantage, Supplement, and Part D drug coverage.

Highmark’s Medicare plans differ depending on location. For the purpose of this review we selected the company’s home zip code in Pittsburgh to review policy options; if you live in a different area, your plans and rates may be different.

Our search returned a total of 10 Medicare Advantage plans, with a mix of HMO, HMO-POS, and PPO plans to choose from.

Community Blue HMO Signature is the only $0 premium (beyond your regular Medicare premium) plan from Highmark. This plan has no copay for primary care visits and a $30 copay for specialist visits. Inpatient hospital stays have a flat rate copay of $300 rather than a per-day charge. This plan includes routine dental, vision, and hearing coverage, and prescription coverage starts at a $0 copay for Tier 1.

Community Blue HMO Prestige has copays of $0 for primary care and $20 for specialists, with a per-admission copay of $225 for inpatient hospital. This plan also includes routine dental, vision, and hearing, and prescriptions again start at a $0 copay.

Community Blue PPO signature provides access to the PPO network and also provides coverage for out of network care. In-network primary care visits have no copay and specialist visits have a $40 copay. Inpatient hospital stays have a copay of $250 per day for the first five days. Out of network copays are higher. This plan again includes routine vision, hearing, and dental coverage and has prescription copays starting at $0 for Tier 1.

Freedom Blue PPO Value Rx is an unusual PPO in that the in-network and out of network copays are the same for many basic services. Primary care visits have no copay, specialists a $40 copay, and inpatient hospital stays $225 for the first five days. Again, prescriptions start at $0 for Tier 1, and dental, vision, and hearing basics are covered.

Like the Value Rx plan, Freedom Blue PPO Select has the same copays in and out of network for office visits and hospital stays. There is no charge for primary care and a $30 copay for specialist visits. Inpatient hospital stays have a copay of $175 for the first five days. Like the other plans, dental, vision, and hearing are included and prescriptions start at $0.

The third Freedom Blue plan is the PPO Classic, which is similar to the others but with a lower specialist copay of $25 ($0 again for primary care) and a flat per-admission inpatient hospital copay of $225. Dental, vision, hearing, and prescription coverage are much the same.

There are four Security Blue HMO-POS plans to choose from. The Basic version has copays of $5 for primary care and $30 for specialists, with a per-admission hospital copay of $350. This plan includes routine vision, dental, and hearing coverage, but does not have any prescription drug coverage.

The Security Blue Value Rx plan has no copay for primary care visits and a $40 copay for specialists. Inpatient hospital stays have a copay of $225 a day for the first five days. This plan does include prescription coverage, with Tier 1 starting at $0. Vision, hearing, and dental are also included.

The Security Blue Standard plan again has no copay for primary care, and it has a $30 copay for specialists. Inpatient hospital stays have a per-admission copay of $350. Again, Tier 1 drugs have a $0 copay and dental, vision, and hearing are included.

Finally, the Security Blue Deluxe plan has no copay for primary care and a $25 copay for specialists. Hospital stays have a per-admission copay of $225. Prescription coverage is similar to the other plans, with $0 copays for Tier 1, and dental, vision, and hearing are included.

For our sample area, Highmark offers a good selection of the standardized letter-coded Medicare Supplement plans.

The listed plans are A, B, C, D, F, high deductible F, G, and N, for a total of eight of the available eleven.

Plan A is the base plan offered by all Medicare Supplement insurers and covers Part A and B coinsurance as well as the first three pints of blood each year. The other plans expand on this coverage, with Plan F being the highest level of coverage; F pays for all out of pocket expenses not covered by Medicare. Because this makes it pricey, the high deductible option is offered to provide a lower monthly premium with a set out-of-pocket amount in the form of the deductible.

Part D plans start at $21.80 a month for the Basic Blue Value plan. The most expensive is the Blue Rx Complete at $156.

These rates are specific to the area in which they were quoted and cannot be easily compared to other regions. That said, we found them to be high overall based on what we have seen nationwide, although there are also some good budget choices here.

Like all health insurance companies, Highmark handles claims directly with the providers, so in most cases there should be no need for customers to be involved in the process. As a result, there is not much information to be found regarding claims on the Highmark site.

Highmark has an A+ rating with the Better Business Bureau (BBB), with a total of 50 complaints in the past three years. 13 of those complaints were closed in the past 12 months. That is a low complaint volume for such a big company. There are 17 negative reviews on the page, citing mainly billing issues and denied coverage.

Consumer Affairs has 17 reviews with an overall three-star rating – which is good for a site people generally use to file complaints. The reviews are scattered across the spectrum, with the majority being three-star and higher.

The National Committee for Quality Assurance ranks all of Highmark’s Medicare branches at a 3.5 overall out of 5. That is a little above average but not into the higher-performing numbers of some other Medicare insurers. That said, for the two PA branches (HMO and PPO), consumer satisfaction is where they earned their highest marks, with 4.0 rankings for both.

Medicare’s 2019 ratings for the Highmark plans are a solid 4.5 stars with the exception of the Freedom Blue plans – which are also the most expensive – that earned only a 3.5-star rating.

Highmark has a good selection of plans, with some budget options as well as some much pricier choices. There are no red flags in our look at their reputation, with low complaint volume and generally good ratings. They are well worth a look for your Medicare needs if you live in their service area.